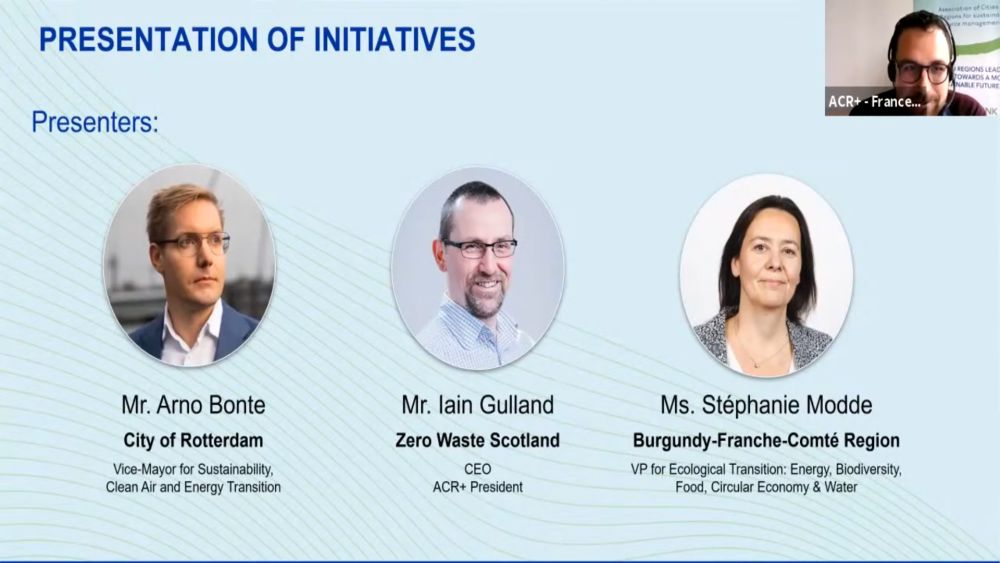 Arno Bonte, Vice-Mayor of CCD signatory Rotterdam presented the CCD at the COP26 session ‘Circular economy & local governments: sustainable resource management to mitigate climate change’, taking place on 6 November. The session gathered a number of key voices in the circular transition, highlighting how EU cities and regions are making steps to reduce the carbon footprint of several key sectors by implementing ambitious, yet feasible waste prevention policies and supporting the shift towards sustainable consumption and production.

Vice-Mayor Bonte presented the aims and objectives of the CCD noting that “being a member of international networks of sustainability frontrunners like the CCD and ICLEI helps get your policy goals into practice”, adding that it has become easier for Rotterdam to get EU funds and to find other cities to partner up with, since signing CCD. It signals that the city is taking the circular economy seriously.

Iain Gulland, CEO of Zero Waste Scotland and president of ACR+ presented the More Circularity, Less Carbon campaign. The campaign helps ACR+ members asses their total carbon impact of their waste, based on the Scottish Carbon Metric. “We need to highlight not just the impact of waste, but also the impact of consumption. Over 50% of Scotland’s carbon footprint comes from the consumption, production and wasting of materials.”

Their presentations were followed by a panel discussion with vice-Mayor Bonte, Niina Ruuska (Circular Turku Programme Manager), and Emanuela Manca, representing the Environmental Protection Directorate of the Autonomous Region of Sardinia. The panel was moderated by Francesco Lembo, managing director of ACR+. The panelists discussed how their cities/regions are enacting circular economy policies, the links between climate change and circular economy and how Europe can help cities and regions implement circular economy and climate change policies.

Manca argued for participatory approaches that leave no one behind, while Ruuska noted that in CCD signatory Turku the circular economy is very strongly embedded in the strategies of the Municipality and has strong political support. Finally, Vice-Mayor Botne highlighted the Rotterdam Climate Agreement, an initiative developed by the city in cooperation with market parties and other organisations.

It’s lastly worth noting that during the session many links relevant for circular economy practitioners were shared in the chat. A selection of them is shared below:

The full session can be viewed on YouTube here.