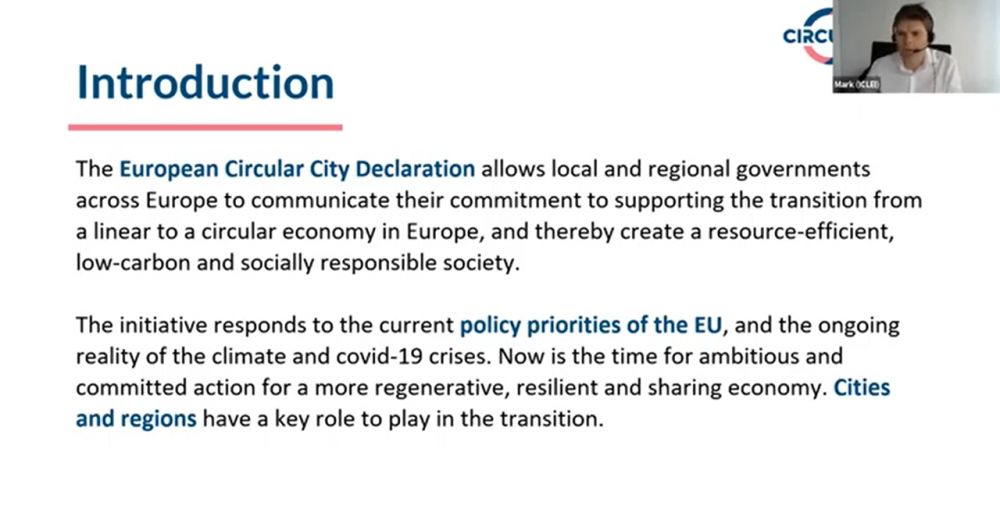 The first European Circular Cities Declaration Webinar was organised on 7 December. During the webinar, the Declaration was introduced to cities and regions potentially interested in signing. They were inspired by current signatories who presented good practice examples of how they integrated circularity principles into their city. The European Circular Cities Declaration was developed by a broad partnership of European stakeholders, who also had the chance to introduce themselves in the webinar.

Valerio Barberis, the Deputy Mayor of Prato, explained how the city aims to transform itself into the first ‘urban jungle’ in the world, while Zala Strojin, Circular Economy Manager in Ljubljana, presented the Slovenian’s capital vision for becoming a ‘green city with convenient living standards’ by 2025.

The perspective of Northern Europe was presented by Liv Öberg, project manager for circular economy in Umeå (Sweden), who gave an overview of the challenges and opportunities facing the Swedish city as it transitions towards a circular economy. Kathrine Overgaard Warberg, head of the Circular Copenhagenprogramme, showed how her city is working to transform waste separation and collection. Finally, Oslo's Håkon Sandven Jafton, coordinator of the Urban Agenda Partnership on Circular Economy, gave an update on the progess of the Partnership.

Missed the webinar? The presentations of all the speakers, as well as the full recording of the webinar, can be viewed here. The next webinar is planned to happen during the first quarter of 2021.