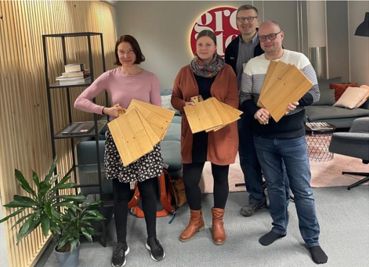 Art industry students at Etelä-Savo Vocational College, made a series of cutting boards from oak panels recovered from the dismantling of the Tuukkala Hospital in the summer of 2021. The selective demolition of the hospital was one of Mikkeli's demonstration actions in the CityLoops project. The cutting boards were purchased by the Mainostoimisto Groteski company business gifts. The money from the purchase was used for the promotion of youth mental health work

Project manager Esa Kohvakka from Etelä-Savo Vocational College accidentally noticed after examining the entrance to the hospital that oak had been used in its lining. "Oak hardwood is at its best in areas where the material is required to be durable and long-lasting. These wooden parts used in the exterior cladding of the hospital were already very dark and looked really rotten on the outside", says Kohvakka.

Immediately, however, hard wood was exposed beneath the surface, and the panels were dismantled in cooperation with the students. "The students got an idea of ​​what the panels are made of, and we ended up making them a series of Tuukkala-themed cutting boards and a kitchen table cover", says Kohvakka.

When developing the products, the idea of ​​raising funds for the mental health work of young people also arose, and Mainostoimisto Groteski Oy from Mikkeli took part. "When Kimmo Haapea, contacted Miksi and asked if we would like to get involved in this project, it was easy to answer yes. Supporting the mental health of young people is an important issue in which our company wants to be involved. In addition, there is also a great story that can be seen as a continuum from the building components of the old mental hospital to the present and the mental health work of young people", says Jyrki Suvimaa from Groteski. As Suvimaa further notes, this is a great example of how the circular economy and youth support can coincide.

The city of Mikkeli demolished Tuukkala Hospital last summer, and Mikkeli's development company Miksei used the demolition site as a demonstration of the realization of a circular economy in the international CityLoops project. "It is great that oak was recovered from Tuukkala, and recycled products were further processed from it. The honor for this circular economy idea belongs entirely to Esa Kohvakka", notes Development Manager Kimmo Haapea of ​​the CityLoops project managed by Mikkeli Development Company Miksei and the University of Applied Sciences of Southeast Finland in Finland. "In Mikkeli, it is definitely necessary to think more broadly about how the circular economy and especially the reuse of building components could be implemented better than at present. In this case, it was good luck that the oak parts were saved from burning, as the demolition survey commissioned by the city did not reveal anything reusable. Usually, the demolition wood goes crushed through Metsäsairila waste management company to be burned at energy plants across the country, even though there are quite a few reusable items, even hardwood parts."