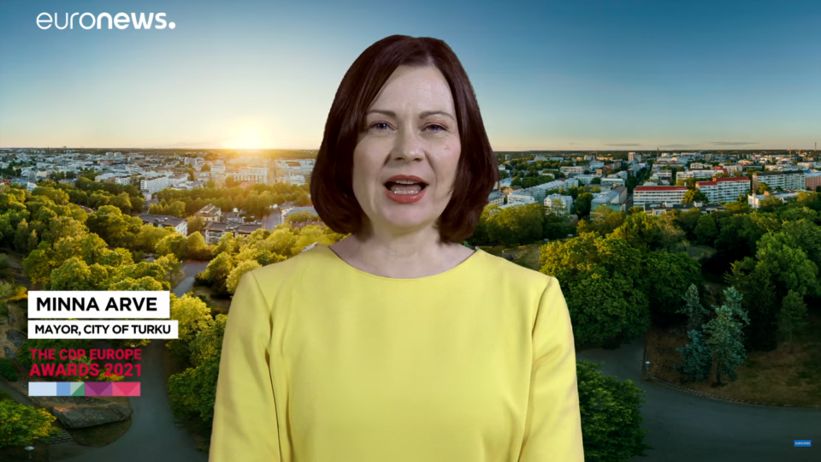 The Awards presentation was broadcast by Euronews in a show hosted by the European Investment Bank, a support partner of the Circular Cities Declaration. During the show representatives of several honorees got the opportunity to explain how they approach the transition to a more sustainable society and what they see as the main challenges. One of the speakers was Minna Arve, mayor of Turku. Mayor Arve explained that her city strives for a climate-friendly, sustainable life for its citizens, which entails “clean energy, carbon neutral transportation, a more sustainable infrastructure, energy efficiency in housing and a circular economy in which we diminish waste and emissions.”

To achieve this, Turku is cooperating with its business community. Arve cites the “Smart chemistry park, where companies in the chemical industry can use each other’s resources and waste” through a platform developed by the city as a good example of city-business collaboration. Another example is the city’s innovative use of renewable energy. “We are taking the heat out of our wastewaters to heat parts of the city with completely clean energy. The wastewaters can also be used for the production of biogas. Here we need companies as well.”

The EU hopes that more cities and business will follow the example of CDP A-listers such as Turku. Through the Green Deal, it is looking to move a minimum of 1 trillion euro of sustainable investments by 2030 to unlock and fund the technologies needed to support Europe’s road to carbon-neutrality. But money and technology alone are not sufficient warned Mairead McGuinness, Commissioner for finance services. “Companies need to understand their impact on the environment, and the impact of climate and environmental degradation on their accounts. Investors need quality information to make investments in line with their choice. The Green Deal is about more sustainable economies and more sustainable societies.”

McGuinness also emphasised the importance of innovation in the context of the Green Deal, in agreement with the European Investment Bank (EIB), which has rethought its investment decisions to foster more sustainable innovation in Europe. Ambroise Fayolle, vice-president of the EIB, noted that the organisation invests 60 billion euro per year on average on projects around Europe. “Many of these projects are on renewable energy, energy efficiency in buildings, and are related to innovation with a climate component. Every project that we finance needs to be in line with the objectives of the Paris Agreement. There are certain projects, airport expansions for example, that we will not finance anymore for this reason.”

The Awards ceremony ended with a message from German Chancellor Angela Merkel stating that the CDP Awards show that “many companies, cities and municipalities are striving to achieve greater sustainability and are successful in doing so.” While noting that there is still a long way to go towards climate neutrality, Merkel points towards the European Green Deal as a way forward. For Merkel, the commitment to cut greenhouse gas emissions by 55% by 2030 “highlights the need for resolute action now. The companies and cities at the CDP A-list have shown that resolve.”